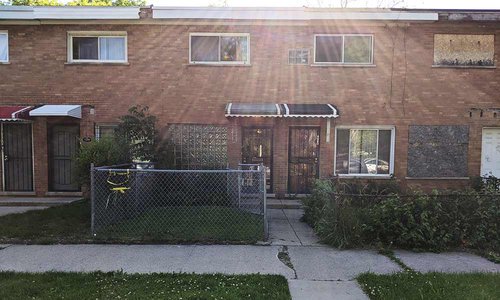 A fantastic investment opportunity originally constructed in 1959, this Chicago Townhouse offers annual rental returns of 9.44%*. The property offers a spacious living area of 87.7m2 and has 2 bedrooms and 1 bathroom.

The property is currently undergoing a full refurbishment which will be completed in September 2021. The work includes the full repair of floors and walls throughout, replacement of broken doors and windows, replacement of bathroom tiles and the kitchen cabinets and will be repainted. In addition, the property is Ideally located in a quiet neighborhood close to Hamilton Park.

Our real estate team have identified the Englewood area, as one that is primed for real estate investment in 2021. Hamilton Park is part of the Chicago South Side and situated just south of Chicago’s Loop. The neighborhood has witnessed ongoing development over the past decades.

This neighborhood includes the Hamilton Park, which it was the first public park in Englewood and offers a big green area with playgrounds, sport courts and pool. Moreover, features the Hamilton Park Cultural Center – Fieldhouse that offers auditorium, dance studio and multi purpose rooms.

The property is fully certified and comes under the Federal Government's Section 8 program. There is an existing Section 8 tenant in place and his lease will be transferred to the new owner. Further info for Section 8

The property is currently vacant and the area enjoys strong rental demand from families and professionals. It is expected a new Section 8 tenant will provide a long-term lease agreement.