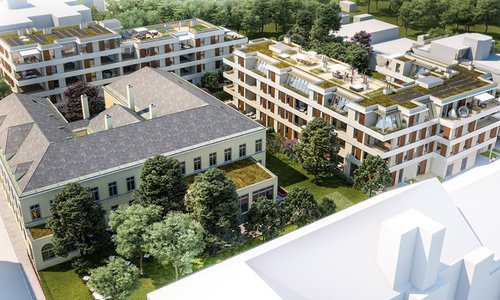 The modern architecture of Wohnresidenz Zögernitz is the result of an international competition won by the architectural firm Schumacher und Schneider from Frankfurt. The expert jury was won over by the elegant design of the residential residence, which gives the historic Casino Zögernitz a worthy setting.

The luxury condos offer contemporary architecture and exclusive design. The materials are of the highest quality and tastefully implemented. Well-thought-out floor plans create a perfect living atmosphere. Enjoy the breathtaking view from the exclusive terraces over the roofs of Döbling or realize the dream of your own garden.

Vienna is Austria's largest and capital city as well as one of nine states. With approximately 1.9 million inhabitants (2.6 million within the greater metropolitan area - nearly a third of the country's population) it is also Austria's most populated city as well as its cultural, economic and political centre. In addition, it is the 7th largest city in the European Union by population within city limits.

Vienna is situated on the Danube River in the country’s east and boasts of famous residents such as Mozart, Beethoven and Sigmund Freud who shaped its artistic and intellectual legacy. The city is also famous for its Imperial palaces, such as Schönbrunn, the Habsburgs’ summer residence. Works by Egon Schiele, Gustav Klimt and other artists can also be found displayed in historic and contemporary building in the MuseumsQuartier district.

Vienna is known for its high quality of life. In a study of 127 world cities conducted in 2005, the Economist Intelligence Unit ranked the city first (tied with San Francisco and Vancouver) for the world's most livable cities. Between 2011 and 2015, Vienna ranked second behind Melbourne and, in 2018, replaced it as the number one spot which it continued to hold in 2019.

Döbling is Vienna's 19th District and is located north of the central districts Alsergrund and Währing. Döbling also borders the Vienna Woods but has some heavily populated urban areas with many residential buildings. Some of Vienna's most expensive residential areas such as Grinzing, Sievering, Neustift am Walde and Kaasgraben can be found in Döbling as well as a number of Heurigen restaurants. Furthermore, there are a number of large municipality buildings or Gemeindebauten, such as the famous Karl-Marx-Hof, situated in Döbling as well as the American International School of Vienna, Lauder Business School and the Q19 shopping center.